The Canadian Agri-Marketing Association (CAMA) is a network of agri-business marketing professionals across Canada. With chapters located in Alberta, Saskatchewan, Manitoba, Ontario and Quebec, CAMA offers valuable opportunities to people in the agri-marketing industry. Agri-business is changing fast, CAMA can give you the specialized edge:

CAMA will help you gain a fresh outlook on the world of agri-marketing and your place in it. Members consists of manufacturers, retailers, agencies, media, academia, other associations and other agricultural-related operations – all dedicated to improving the marketing and communications sector of the industry throughout the value chain.

From unbeatable events and education to stellar networking, CAMA brings together top-notch professionals for business and good times.

Become a member or renew your membership. 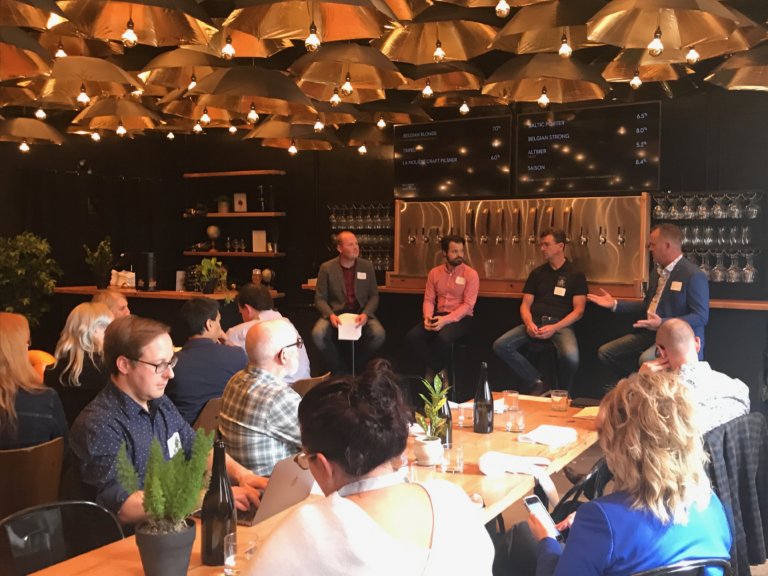 The History of CAMA

Supporting agriculture and agri-marketing communications since 1966.

In the beginning, CAMA meetings were held monthly with a guest speaker at each meeting. Speakers ranged from professionals within the agriculture industry sharing best practices, to marketing and sales managers of fast food chains to the Director of Marketing for Mary Kay Cosmetics. Speakers have always been presented with the traditional CAMA bell as a token of appreciation.

In 1982 the CAMA Student Chapter was created at the University of Guelph to engage the next generation in the agri-marketing industry. CAMA members and the executive shared information with the students through mentoring. Supporting agri-marketing students continues to this day, as the University of Guelph Student Chapter and University of Saskatchewan are both strong groups at their respective schools and compete annually at the NAMA Student Marketing Competition.

In 1984 the first Best of CAMA event was held in Calgary. This event was modelled after the NAMA conference held annually in the USA. Best of CAMA was originally an awards night followed by a one day conference. The inaugural event was successful with 215 agri-marketing entries from across Canada. This event has evolved and changed over its many years, however still celebrates the cream of the crop in Canadian agricultural marketing and provides a platform for networking and education.

In the early years of the organization, communication between members and the executive looked a lot different than it does today. Monthly newsletters, notices, invitations, acceptances, minutes and meeting notices were sent by mail, and executive meetings and member events were held in person and over the phone. Now, almost all of the communication between the members and executive take place over the internet with online meetings, webinars and conference calls being an easy way to keep members connected. However, chapters still organize regular in-person events which provide valuable networking experience and ‘camaraderie’.

An organizations is only as good as its members and CAMA has had a strong group of industry members throughout its many years of operation. Many predominant names in the agriculture industry have been involved with the organization in some capacity over the years, as a member of the executive, speaking at a meeting, or by attending an event. Many past presidents and committee members involved in the organization many years ago are still faces that you will see at CAMA events to this day. This is an attest to the wonderful organization that CAMA has been and will continue to be from years to come.

With chapters across the country, CAMA allows members to keep up-to-date on the latest agri-marketing trends. CAMA members are eligible to enter the annual Best of CAMA  awards program, which celebrate excellence in Agri-Marketing in Canada.

Visit chapter pages to find out more about the CAMA leadership and events in your province:

"We aim to make ag connections while staying current on the latest trends within the dynamic industry of Alberta's agriculture."

"Reach out to our team for the latest Saskatchewan agriculture and agri-marketing events."

"There is no other place where Manitoba agri-marketers go to build their personal brand and maximize their involvement in this dynamic industry."

"Ontario is the CAMA organization’s largest chapter, and our members are spread out geographically across our province."

Why do the movers and shakers of the agri-marketing industry belong to CAMA?

Sign up to CAMA's newsletter by becoming a member in your chapter and find out by staying up-to-date on all of the latest events.

We host a variety of events throughout our chapters to provide networking and learning opportunities for agri-marketers.

The Best of CAMA is our prestigious annual event in celebrating excellence in agri-marketing communications.